Battery Light Is On: Causes And Consequences 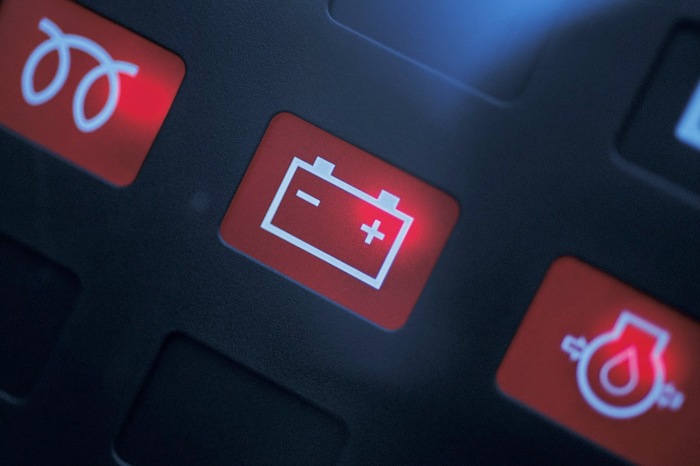 Every car owner from time to time conducts diagnostics of his car to identify problems. Nowadays, it becomes almost impossible to do this, especially while driving. Verification tools are getting smaller. So, for example, voltmeters are no longer installed on the instrument panel, and charging problems can only be found out after notification of the warning lamp. In this article, we will tell you why the battery light on the instrument panel is on.

How the battery warning light on the dashboard works

When the driver inserts the key into the ignition switch, the red battery light on the panel lights up. Then the motor starts and the icon goes out. This should be normal, the battery indicator is on until the ICE starts to work.

During this period of time, when the ignition is turned on, but the engine has not yet started, a self-diagnosis of the car systems occurs before the engine starts. In addition to the battery light, other indicators light up. After checking, some of them go out almost immediately, the rest are turned off after the engine starts. If everything is in order with the battery, then when the engine is running, it receives charging, and the icon on the panel lights up for a few seconds and then goes out.

In another way, the device of the warning light can be described as follows: the ignition is turned on, then the voltage is supplied through the fuse to the battery on the dashboard.

Then the current passes through the diodes, relay-regulator, brushes, slip ring and winding. After starting the internal combustion engine, the voltage is equalized at the lamp terminals, and the icon goes out. In this case, the battery is charged. If there is any malfunction in the car system, the battery light does not go out after checking, or its icon periodically appears on the dashboard.

The work of the control lamp is tied to the alternator, although it is a separate element. The system is pretty simple. Two electric circuits are connected to the battery light.

Battery operation depends on the voltage at both inputs. If the current is supplied in the same way, the battery light goes out, and if it is different, it lights up. This explains why two chains must be connected.

How it works. The driver turns on the ignition. In this case, current flows from the battery to the lamp in the first circuit, and there is no voltage from the alternator in the second circuit because the engine is not yet running. The red indicator on the instrument panel comes on. After that, the car owner starts the engine, the alternator starts to work, a voltage appears in the second circuit. The light goes out. In this case, the current from the generating device also begins to flow into the first network.

When the battery light is on, a check is carried out in the car system: is everything in order with charging, is there voltage. Some people believe that at this moment a complete diagnosis of the car takes place before starting the engine, but this is not the case.

If the alternator breaks down while driving, the voltage stops flowing to the second circuit. Charging goes only from the battery to the first circuit. The red warning light icon reappears on the panel.

Why is the battery light on

The car battery and alternator are closely related. To start the engine, the current from the battery flows to the starter motor. After that, the voltage begins to flow from the alternator, which is powered by a running engine.

The battery is charged from the alternator. The higher the number of revolutions of the engine, the higher the voltage that comes from the source. To prevent overcharging and the current level is not too high, a relay-regulator is installed on the generating device.

The main function of the relay-regulator is to maintain the optimal voltage on the battery since the current supply does not depend on the number of engine revolutions.

The battery light on the dashboard is most often due to the fact that the battery is not being charged from the alternator. That is, the car was started from the battery, the internal combustion engine starts to work, but the icon does not go out.

The most common breakdowns:

When the battery light on the panel is on while the internal combustion engine is running, first of all, check the level of charge at the battery terminals. Diagnostics can be done quickly by using a multimeter. The norm should be 13.5-14.3 V. If no current is supplied, the voltage will be 12V.

For a more thorough check, you will need a knife, pliers, flat and Phillips screwdrivers, a 12V test lamp, a multimeter, fine sandpaper.

Reasons why the battery light is on

The second option – the battery is discharged, the current level on the battery is 14V, but it sags under load. This situation is possible due to problems with the pulley, poor tension of the alternator belt, wear, or damage to its bearings.

Problems with the diode bridge can also be among the reasons. Even a single diode failure can lead to voltage failures. Therefore, you need to check its condition. Also in this situation, you should diagnose the stator winding. To do this, turn off the ignition and check the alternator, its diodes and other elements with a multimeter. At the same time, the generator brushes are checked. They must be at least 5 mm. If the length is less, they will need to be replaced.

A blown fuse can also cause the battery to stop receiving charging. As a rule, this is F10 with a nominal value of 10 A. The problem in most cases is solved by replacing it. Malfunctions can also be in the relay or ignition switch. For diagnostics, you need to dial out with a multimeter. 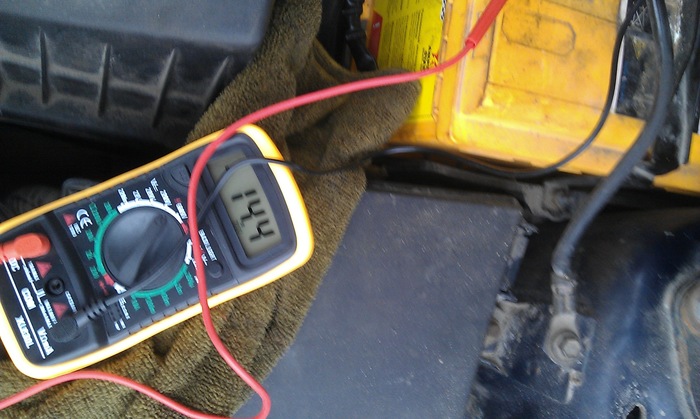 Sometimes it happens that the devices work after turning the key in the ignition switch, although charging is not in progress. This is solved by removing the wire from the terminal of the generating device and connecting it to the body or minus. If the battery light is on, then the reasons are a malfunction of the alternator excitation winding.

Poor contact in the battery connector can also cause the dashboard indicator to light up. To eliminate the appearance of such a problem, you need to clean all the contacts and connectors. When the light is weak, intermittent, or does not light up at all, then you need to look at other indicators. If all the icons are dim, the problem is not with the lamp. If only the battery indicator does not shine well, then this may be due to a malfunction of its contacts.

There are times when the battery light is on after turning the key in the ignition lock, but after that, it does not go out or blinks after starting the engine. The icon indicates that charging is intermittent or not charging. The most common cause is poor wire contact with the dashboard connector.

If you have performed all the recommended checks, but the cause could not be identified, then you need to diagnose the relay-regulator. For this, the current is applied to the contacts, then its level on the brushes is checked. If the voltage is 12V, then the device is in order. Otherwise, the relay controller must be replaced.

We have analyzed the reasons why the battery light is on when the internal combustion engine is running. Now consider the opposite situation, when the light does not light up with the ignition on and the engine off.

Another reason is a relay malfunction. In some cars, the device is installed with control of the battery charge lamp on the dashboard. In case of failure of the relay, the indicator will also not light up.

Diagnose relay malfunctions with a multimeter. It is used to measure the current level at the positive output. If it is less than 6V, then the problem is definitely in the alternator. A higher value indicates a relay failure. In this case, it will need to be replaced.