We offer an entire collection of used VW Golf spares and aftermarket parts. Whether you require engine parts, gearboxes, turbos or body parts, our helpful sales team will be happy to assist you! 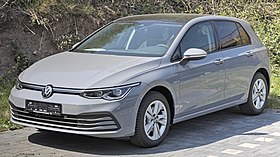 The all-new Volkswagen Golf was presented to the global public in October 2019 at a special event in the German manufacturer’s home town of Wolfsburg. The novelty is a full-fledged eighth generation, which means it has received a large portion of improvements. The new generation has received an extensive line of power units, complemented by electric motors, an upgraded platform and a new design. As for the exterior, the designers tried to preserve the continuity of generations, but also refresh the classic features. The narrower headlamps are striking. They got more complex outlines and are visually divided into two sections. The running lights visually continue the line of the radiator grille and slightly step over the front fenders. Moreover, even in the starting trim levels, the headlights will receive a full LED filling. Matrix sections can be ordered for an additional fee. The front bumper has one continuous central air intake consisting of many thin horizontal ribs. At the rear, you can see stricter brake lights with different graphics, as well as a bumper with two exhaust pipes along the edges. The cabin has undergone a radical change in layout. From now on, the car, already in the basic configuration, is equipped with a virtual cockpit. Before the driver’s eyes is a 10.25-inch color screen with instrument indicators, and to the right of it is a touch-screen display of the navigation system with a diagonal of 8.25 to 10 inches, depending on the configuration. Among other options, it is worth noting a projection on the windshield, a personal voice assistant, three-zone climate control, as well as a communication system with the Car2X infrastructure, capable of connecting to other vehicles and advanced autopilot. It is based on radar cruise control and lane tracking. He is able to control the car at speeds up to 210 km / h and not keep his hands on the steering wheel for less than 15 seconds. Otherwise, the electronics will stop and park the car on the side of the road.

Volkswagen Golf is a compact C-class model. After the change of generation, it became longer, slightly narrower and taller. Its overall dimensions are: length 4284 mm, width 1789 mm, height 1456 mm, and the wheelbase is 2636 mm. The model is based on the latest version of the modular MQB platform. Independent McPherson struts with an anti-roll bar will be installed at the front. At the rear, in simple equipment options, with weak power units, a semi-independent elastic torsion beam will be installed, and in the older configurations, a non-standing independent multi-link system. By default, conventional shock absorbers and coil springs are installed in a circle. For an additional fee, you can order DCC adaptive struts with variable damping stiffness.

About eight powertrain variants will be prepared for the Volkswagen Golf. The backbone of the power line will be the upgraded EA211 Evo units. Budget models will receive three-cylinder units with a volume of only one liter, 90 and 110 horsepower. More powerful versions are equipped with full-fledged 1.5-liter fours for 130 and 150 horses. As a transmission – classic manual variable gearboxes or proprietary DSG preselective robot with two clutches. A mild hybrid system with a separate 48-volt on-board network can be ordered with the automatic transmission.